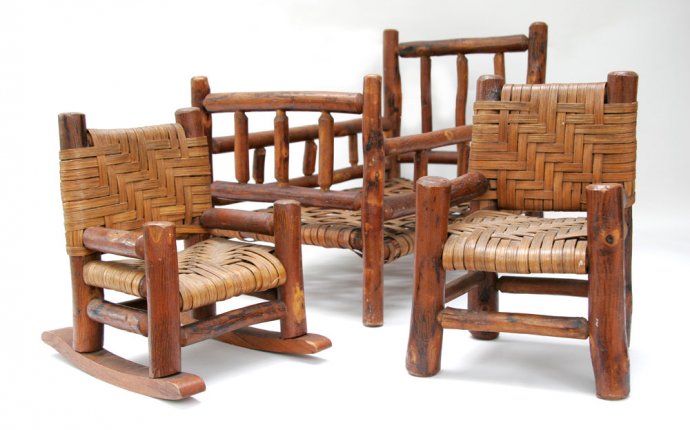 Q:We inherited several pieces of antique Old Hickory furniture made from hardwood saplings. We love the rustic look and have enjoyed using these pieces in our gazebo for years, but they are in real need of some TLC. The finish has come off, and we worry that continued exposure to dampness and humidity will shorten their life span. Given the age of the pieces and the fact that they are made of bark-covered saplings, we are nervous about trying to seal them ourselves. Any suggestions on how to restore and protect their finish for continued use?

A: Old Hickory Furniture Co. in Shelbyville, Ind. (800-232-2275; oldhickory.com), refinishes pieces like yours all the time, said Bob Morrison, a company representative. Based on the picture you sent, he said he believes your settee/bench dates to the 1940s and originally had a seat and back made of woven rattan cane rather than the strapping that’s on it now. Old Hickory could refinish the piece and reweave a seat and back like the original design for about $300. But you would need to ship or deliver it. The turnaround time for the repairs would be two to three weeks, so you might be able to time a vacation with the drop-off and pickup. Or you could send the furniture via UPS or another shipper. Search the Web for “furniture shipping.”

If you want to do the work yourself, the company recommends that you first inspect the furniture to make sure it is structurally sound. If you find a problem, email the company at info@oldhickory.com and ask for advice.

Assuming you find nothing beyond problems with the finish, begin by cleaning the furniture with soapy water and a stiff brush; don’t use a power washer. Rinse and let the piece dry. Then sand with 150-grit sandpaper, followed by 220-grit. Do this by hand, going just deep enough to remove the old finish but not so deep that you take off all the bark. Wipe off all the sanding debris, ideally with something like a microfiber cloth that really grabs the dust.

Then apply a coat or two of a clear exterior wood varnish. The company suggests General Finishes Exterior 450, a clear, water-based finish with ingredients that absorb ultraviolet rays from the sun, helping to prevent damage to the wood. It comes in gloss, semigloss and satin. Woodcraft (woodcraft.com), which has stores in Springfield and Leesburg, sells this product for $25 a quart and $70 a gallon.

●My house had the same problem: The drain could not handle the water in a downpour. The solution by a plumber was to dig a large hole where the drain was located and put a sump pump into the hole, with the outlet directed away from the stairs and into the yard. The hole was covered with a hard plastic cover that can be walked on. Because some water remains in the hole and there are drainage holes in the cover, a piece of screening material was placed over it to keep insects from breeding. The only downside is a power failure. The house has a generator to obviate this concern.

●A solution for the Glenn Dale, Md., reader whose outside basement drain cannot handle downpours is to have a sump-pump contractor install a drain outside the doors that is equal or greater in length to the width of the doors. The contractor should then link the new outside drain to the existing sump-pump drain field, which should be just under the slab a foot or two inside the door. The overflow never reaches the door but instead gets diverted into the new drain and is drawn out by the sump pump. It worked at our house. The true culprit is not the capacity of the existing drain but rather that builders no longer install a step between the stairway slab and the basement floor slab, creating a catch basin. It’s cheaper and easier to make one continuous concrete pour for both the basement floor and stairway.

●Tell the reader to push a drain snake down the drainage hole. If it hits a solid object within two or three feet, it’s concrete in the drain’s trap, a common occurrence! If so, knock out the concrete from around the drain, cut off the pipe and install a new trap. It’s much cheaper than purchasing an areaway cover, if that’s the problem.