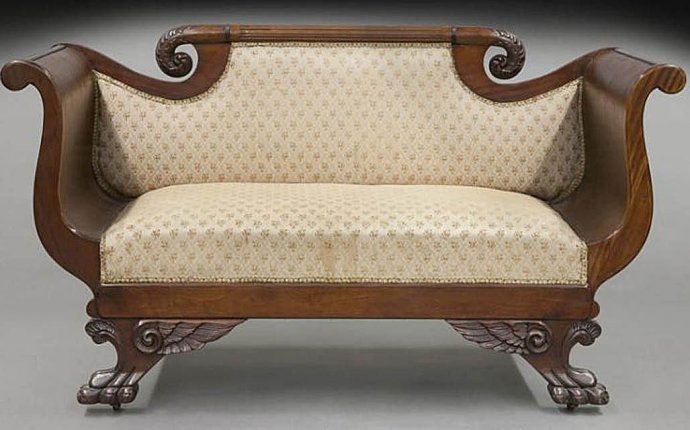 American furniture crafted in the Chippendale style from about 1750-1780 was named after London cabinetmaker Thomas Chippendale's work. He became quite famous in his day after publishing The Gentleman and Cabinet-Maker's Director, a guide for constructing a variety of furniture pieces, several times between 1754 and 1762. Important pieces crafted by Chippendale can sell in the millions, but this style has been revived many times since the 1700s and can be found in a variety of price ranges.

American furniture made in the Chippendale style, which falls within the Colonial period, was conservative in comparison to English designs from the same time frame, according to American Furniture: Tables, Chairs, Sofas and Beds by Marvin D. Schwartz. Chippendale is closely related to the earlier Queen Anne style, and it is important to remember that elements in furniture designs sometimes overlapped as tastes changed from period to period. Thus, you may find a piece that falls into the Chippendale category overall, but has a Queen Anne element or two as well.

Nevertheless, there are some telltale characteristics to look for when identifying Chippendale pieces.

The finest Chippendale style pieces were usually crafted from mahogany. Walnut, cherry and maple were used for less expensive furniture made in this style when it comes to period pieces.

Later versions often incorporated many different types of woods, and generally have a dark finish to mimic older styles.

In Antiques 101 by Frank Farmer Loomis IV, he shares that while Chippendale "appreciated the long-established Queen Anne style, he realized that innovative designs kept sales flourishing." Thus he took inspiration from the Chinese and incorporated design elements borrowed from that culture including the straight Marlborough leg typified in the back legs of the chair featured here.

Many Chippendale pieces have cabriole legs (like the curving front legs illustrated in the photo shown here). American cabinetmakers from Newport, Rhode Island often used classically styled reeded or fluted legs as well. Furniture makers in Philadelphia incorporated Rococo influences resulting in more elaborately carved legs. Some pieces, such as side chairs and small tables like the Pembroke style, have straight legs as mentioned above but other elements of Chippendale style are still present.

American cabinetmakers often incorporated the ball-and-claw foot (like those shown in the photo here) into their Chippendale style designs. The ball-and-claw foot was already passé with English furniture craftsmen by the time Americans embraced the style, according to Schwartz.

While legs and feet often provide a good start when identifying Chippendale pieces, there are a number of other features to look for as well:

Many reproductions of the Chippendale style were produced around 1900 during the late-Victorian period. While these are antiques in their own right today, in comparison they do not have the finely crafted details found in early Chippendale style pieces nor do they command the prices of true period furniture. Since most people can't afford the upper crust pieces, later examples do provide an antique alternative for those who like the style without the big budget for original period pieces.

Chippendale influence is still widely found in formal furniture design and manufacturing including the use of cabriole legs and ball-and-claw feet.

Some modern pieces completely copy older designs while others derive inspiration from this classic style.