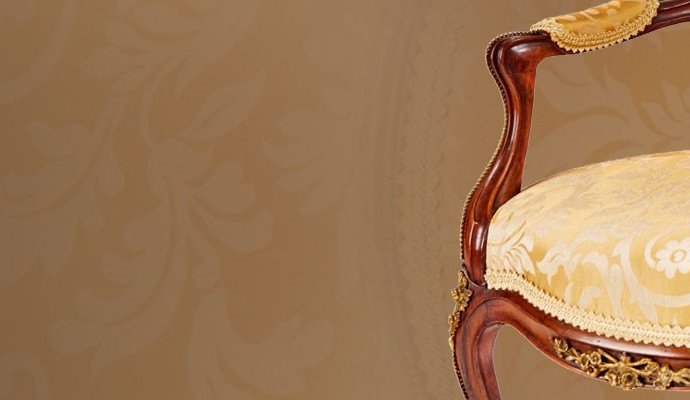 There are treasures everywhere you look. Rare things. Exquisite things. Gloriously, decadently opulent things. Over here is a George III fireplace mantel complete with Siena marble frieze, produced circa 1670. Over there is a one-of-a-kind Italian crystal chandelier designed by the celebrated glassmaker Giulio Salviati and manufactured in Murano during the latter half of the 19th century. And be sure to take a look at Berthe Morisot’s 1894 oil painting Jeune Fille au Manteau Vert, created by the pioneering French impressionist at the peak of her fame.

These lust-worthy objects are not in a museum, mega-mansion or royal palace. They’re not in an auction house catalog, either—and they’re definitely not on eBay. They’re all available for purchase on 1stdibs, the digital marketplace that is revolutionizing how antiques and luxury goods are bought and sold.

Launched in 2001 as a virtual-world counterpart to the historic Marché aux Puces, the sprawling flea markets that take place each weekend across Paris, 1stdibs has evolved into the premier online shopping destination for interior designers and private collectors across the planet, aggregating furniture, fine art and other treasures from the most trusted and respected dealers in the business—dealers who were effectively blocked from doing business on the web until 1stdibs removed the logistical pain points that had been holding them back.

“My theory is that every single industry will be completely redefined by the internet, ” says CEO David Rosenblatt. “The world of design—and art, in particular—has yet to go through that transformation, and this is the company that will offer that opportunity. Fifteen years ago, if you wanted to buy any of the products we sell, you had to live in a city that had the right sellers, and you were limited to the products they sold. Our dealers now have access to a global audience who are buying 24/7, and our buyers have access to a global supply that is also available all the time.”

New York-based 1stdibs has items for every budget. That Salviati chandelier? It’ll set you back a cool $1 million. But if it’s Murano glass you crave, there’s a pear-shaped paperweight selling for just , and furniture and other items at nearly every price point. In recent years the company has made room for new categories like vintage jewelry and fashion, as well as contemporary goods from top designers like Tom Dixon.

1stdibs is extending its geographic horizons, too. Four years ago, the site operated exclusively in North America, the U.K. and France. Now it spans 17 markets worldwide. Rosenblatt credits the changes to a sharp spike in traffic: When he took over in late 2011, 1stdibs averaged fewer than 1 million site visitors per month; now it welcomes more than 3 million. While U.S. buyers once generated 95 percent of all transactions, international shoppers now drive between 30 and 35 percent of transactions monthly.

Rosenblatt has also implemented a series of technological enhancements and new buyer and seller tools, recently introducing a mobile app for Apple’s iOS. In addition, 1stdibs is taking steps to increase its accessibility to an even wider customer demographic, creating content to educate consumers on the history and impact of the products its dealers offer.

The investment is paying off. Chicago retailer Antiques on Old Plank Road joined the dealer network in 2006, and owner Richard Buxbaum credits 90 percent of his sales to 1stdibs and the store’s own website. He says that as of May 2015, his store had completed more than 3, 500 direct sales via 1stdibs, corresponding to at least million in merchandise value.

“1stdibs changed the whole industry, ” Buxbaum says. “I don’t know how you can be in this business today without them.”

The Manhattan headquarters of 1stdibs is a real-world extension of the company’s digital aesthetics, mirroring the website’s distinctive color palette of black and white with gold accents. The lobby’s custom striped Italian marble floor leads to an open space balancing staffer workstations with an eclectic mix of midcentury tables, couches and chairs, many sourced from 1stdibs dealers. Highlights include a pair of yellow Eames rockers and a striking chess-set coffee table inspired by the work of acclaimed designer Milo Baughman.

“We marry the world of design and the internet, and the office is a physical manifestation of that, ” Rosenblatt says. “The idea was to achieve an aesthetic that blended the best of the internet sensibility, as well as the style that we’re most known for.”

That signature style is a reflection of 1stdibs’ exacting curatorial philosophy. The company does not allow consumers to sell on its site and carefully vets all dealer partners, employing a team of specialists and experts to evaluate prospective sellers on a range of criteria, including industry reputation, financial stability and overall quality of products.

“We have a very long wait list—hundreds of dealers long—who have applied to list on the marketplace, but who we believe are not yet ready to do so, ” Rosenblatt says. “Part of the brand promise we offer to the consumers and interior designers who rely on the site to source product is that they don’t need to worry about authenticity or the quality of the items that we sell, because we’ve done that work for them.”

In its original incarnation, 1stdibs operated as a lead-generation business, leveraging a Craigslist-like advertising model that charged dealers a largely fixed amount per month in exchange for the right to list a designated number of items. Under Rosenblatt’s watch, in mid-2013 1stdibs adopted an end-to-end e-commerce model, with all communications between buyers and sellers, as well as an increasingly large percentage of transactions, unfolding on its platform. (Buyers may also email, call or visit a dealer’s own website or brick-and-mortar store to purchase items offered on 1stdibs.)

1stdibs now boasts three sources of revenue. It charges dealers a subscription price in exchange for the right to sell on its site. Dealers may also pay on a per-item basis to list and promote their wares. And if a transaction takes place via 1stdibs, the firm claims a commission as well as a credit card processing fee. Rosenblatt declines to divulge fee and commission details but says that since the e-commerce features launched two years ago, 1stdibs is selling more than $100 million of products online on an annual basis.