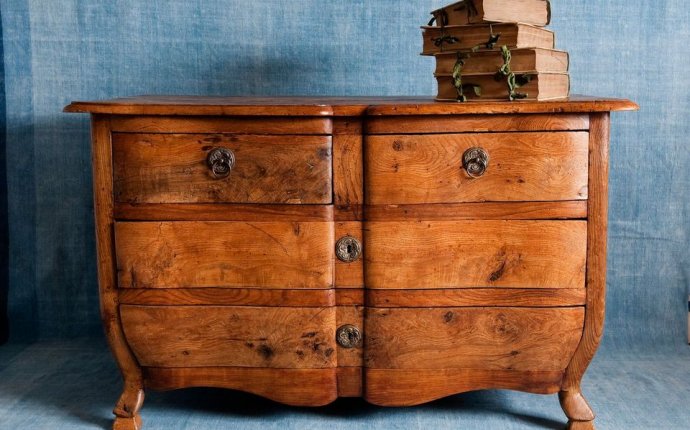 Looking at the joinery, or the way a piece of antique furniture is put together, will provide many clues that help in determining the age. But there are a number of other factors to consider as well, including the tools that were used to craft a piece and what the individual components look like. Examining these elements individually, as well as furniture pieces in their entirety, will help you learn to correctly date them.

Looking at the bottom or back of a piece, or inside its doors and drawers, can provide important clues about whether or not a piece of old furniture was machine cut or crafted by hand. Most handmade pieces will show some irregularities to the surface such as minor nicks indicative of a hand plane being used to smooth out the wood, and this is sometimes even more evident on the back than on the finished front surfaces.

Most machine made pieces date after 1860, according to art historian Lori Verderame (also known as Dr. Lori) so if the piece you’re examining is perfectly finished without shallow cuts being evident, this clue points to it being made in the late 1800s or beyond.

Do All the Elements Match Exactly?

Smaller “matching” elements, such as wooden drawer knobs, chair spindles, or feet on a variety of objects, may have slight differences in the shape if they were hand crafted prior to 1860 or so.

Machine made furniture produced largely after 1860 will have components that match more perfectly than those made by hand. The reason? It’s almost impossible to make the same exact furniture element over and over identically without the use of machinery.

What Types of Tools Were Used When the Piece was Constructed?

When hand planes were used to smooth woods, they more often than not left some sort of uneven surface.

As discussed above, this is especially evident on the back or underside of pieces made prior to the mid-1800s. Cuts and nicks can also leave proof that hand chisels and other tools operated with elbow grease were used to shape woods.

When circular saws were used, and this wasn’t prevalent until the mid-19th century, a circular pattern is usually present as evidence. Manually operated hand saws left a straighter pattern in comparison. That’s not to say wood crafters aren’t still making furniture by hand today, and they were doing so at the turn of the 20th century, too. Looking for other signs of age is also wise in addition to indicators of hand craftsmanship.

Looking at Woods and Upholstery Fabrics

For instance, oak was used in furniture made prior to 1700. After 1700, mahogany and walnut were very popular. Moving into the 1800s, maple and cherry showed up in fine furniture manufacture quite often.

Many Victorian furniture manufacturers used mahogany and rosewood through the late 1800s. Then, around 1900, oak became very popular again.

Can you circa date solely on the type of wood used? Absolutely not. But materials can be an indicator of age when they fits in with the overall style and age of other components that make up the furniture you’re trying to date. The same goes with upholstery if it’s original, and that’s a key factor. Silk, wool, and cotton have been spun and woven into a variety of damasks, satins, and brocades with many different patterns. Consult a book with a upholstery guide like American Furniture: Tables, Chairs, Sofas & Beds by Marvin D. Schwartz (now out of print, but available through used booksellers) for more clues about fabric designs used at different periods in furniture history.

Looking for Old Screws and Other Hardware

Screws weren’t made completely by machine until 1848, according an Antique Trader column by regular contributor Fred Taylor. So if you find a furniture item using screws that have completely rounded shafts, pointed ends, and perfectly finished heads with matching cuts (much like a screw you would purchase today), the piece likely dates to the mid-19th century or later.

Screws made from about 1812 through the mid-1800s were partially machine made giving the threading a more even appearance, according to Taylor. But the heads were still finished with hacksaws to add the groove to fit a screwdriver like those made even earlier, so no two are exactly alike. The first screws were crafted in the 1700s by blacksmiths using square nail stock that was heated and pounded until it was somewhat round. The tips were blunt in these oldest screws, and each one was unique. If you find these hand finished screws in furniture, investigate other aspects of the pieces to see if they match the screws in age.

Other brass hardware can be an indicator of age as well. "Early 18th century hardware was cast from molten brass using molds made of sand, " Taylor explains in his Antique Trader column. "This type of hardware is easy to recognize because it often has 'inclusions' from the sand itself in the brass, either grains of sand or or odd colors from impurities. The backs of this type of hardware were often left with the impression of the sand while the surfaces were polished."

Early 19th century brasses will also exhibit a rough texture, finish, and threading akin to the screws mentioned above while modern hardware will not. The presence of brass hardware at all also tells a tale. From the 1830s up until the Eastlake period in the 1880s, brass hardware fell out of favor in furniture manufacture and was sparsely used. If you have a piece with brasses, it's most likely pre-1830s or a revival piece from the late 1800s on.

Determining the Style of a Piece

The overall style – such as Chippendale, William and Mary, or Rococo Revival along with a host of others – can help you determine when a piece was made.

As you examine the piece, sleuth for clues that support your initial theory that you have a piece of authentic period furniture. And, realize that those masterpieces are actually few and far between. More than likely, you will discover that you own a later revival piece although it's awfully fun to dream big when you begin your research.