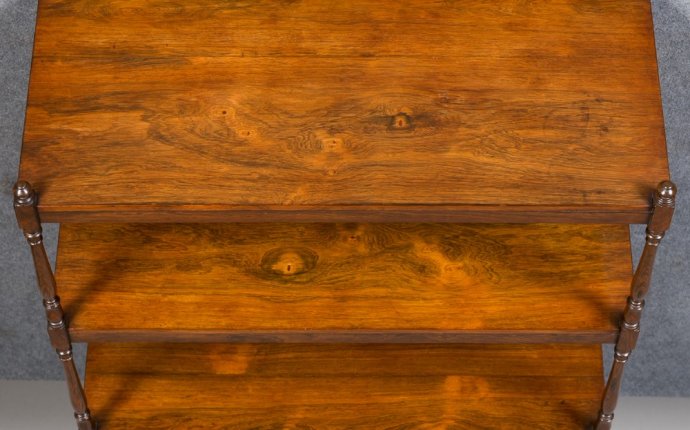 
Article on furniture from The Antique Quarterly
Hand Tooled Period Furniture is Decorative, Collectable, and Useful Many people collect and use furniture of all kinds, from the earliest antiques to modern design of the twentieth century. Most furniture that interests us, and that we sell, is more than one hundred fifty years old or more. Some examples are more than two hundred fifty years old Not many things in our lives are still useful and usable, let alone charming and sometimes beautiful, after two hundred years. That simple fact is one of the reasons many of us enjoy period furniture in particular; it is the domestic equivalent of great classic cars or Paris designer clothing, made entirely by hand, and with natural materials we can never find again. Understandably, older pieces show signs of use- stains, scars, damage that was repaired years ago, old paint, missing paint, and restored paint, pieces replaced, and sometimes unrestored damage. Some of the items we sell were made as early as 1700 or 1725. Many were made after that but before the Industrial Revolution. Others were made after the Industrial Revolution, produced in small factories using early machines that were beginning to appear in the 1820s and 1830s. Used initially alongside hand methods and tools, the first circular saws appeared, machine made nails would gradually replace wooden pegs and hand made nails produced by a blacksmith; and machine made screws came to replace their hand cut predecessors. Only a few pieces that we offer were made entirely with machine methods or after electricity became available in major cities in the late 1800s. Anyone who has ever tried to make a bookshelf with boards from a lumberyard can really appreciate how hard even simple forms can be. The fact that the most elegant 18th and 19th century furniture was made by hand, and that those designs are still reproduced today, speaks to one of the highest achievements of an apprenticeship system going back to the Middle Ages. Combined with the fabulous design skills of the people like Chippendale, Sheraton, Hepplewhite, and of their French and European counterparts, those traditions are the sources of early American furniture design and construction techniques. And much of what is known as “country” or “primitive” furniture shows how inspiring the designs were then too. Country craftsman and carpenters of the time would have seen examples or drawings of the latest trendy look from London, Paris, New York, Boston, and Philadelphia, and did their best to capture the spirit. Today many people treasure the crafts furniture and sculpture made by modern wood workers and artists, and sold in specialty shops and art galleries throughout the Pacific Northwest. For much the same reason, because older antique furniture was made entirely by hand, from cutting down the trees to slicing and planing the boards, all the way through cutting or turning individual pieces and assembling them, we want to keep as much of the original as possible. We cannot control was done or what happened to antique pieces before we acquired them, but we try to assure that they are sound. Most have held up to a century or more of wear and should give many more years of good service, a testament to the soundness of the construction techniques. However some pieces are fragile, and we try to indicate that in our descriptions. A small fragile chair might be best used as a hall decoration rather than a TV lounger. We also try our best to determine if any major parts of a piece have been replaced and to indicate that in our descriptions as well.