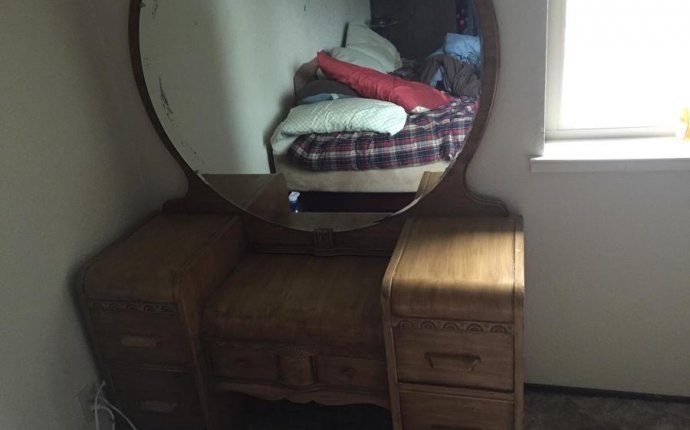 QUESTION: My parents bought a bedroom set when they got married. They kept it all their married life. Now that they’ve both passed on, it’s come to me. It’s of a very unusual design with lines that look similar to Art Deco, with curves and veneer decoration. Can you tell me what this is?

ANSWER: The photos you sent identify your bedroom set as what was commonly referred to as “waterfall” furniture. Because it was relatively inexpensive, it became the style of choice for middle class newlyweds. In 1930, a set like this would have cost between $19.95 and $39.95. More luxurious sets sold for slightly more.

In the late 19th century, most American furniture makers produced pieces from solid wood. This continued until after World War I when the conservation movement, led by Teddy Roosevelt, gained prominence and the invention of lumber core plywood signaled the end of this practice. Plywood consisted of four layers of wood, two on each side, glued to a core of inexpensive lumber. Makers glued the layers at right angles to each other for added strength.

Before 1930, manufacturers prided themselves in producing pieces with sometimes up to 11 layers of wood, especially for curved door panels. Working with curved surfaces was up to this time a very painstaking and expensive process.

But then came the Great Depression. With so many people struggling just to get by, furniture makers had to adapt. Families continued to grow and there became a demand for furniture from the newlywed market. Most new couples couldn’t afford to guy their own house, so all they had was a room in usually the bride’s parents house. The "Bedroom Suite" was probably the only thing that they owned, resulting in inordinate sentimental attachment to the furniture and a reluctance to change even when finances improved.

Because of the furniture’s free-form and curvy lines, people called it “waterfall” furniture. There are all types of pieces, including chairs, desks, end tables, clothes chests. Waterfall furniture doesn’t have a frame. It relies on the strength of the molded plywood to give it structure, enabling makers to also give it curved or rounded horizontal edges. Manufacturers employed an unusual veneer design called bookmatching on the fronts of pieces and ran the grain of the veneer from front to back on the top surfaces. Drawers featured Bakelite handles.

The inspiration for waterfall furniture came from handmade furniture emanating from the modernist movements in France, Austria and Germany, known as Art Moderne. Makers copied the designs of the ultra-exclusive French firm of Sue et Mare. Early examples, designed to appeal to broad audiences. mix Victorian motifs with modernist themes.

The style is most frequently seen in Bedroom Suites, although manufacturers produced dining sets and even billiard tables. A basic bedroom set included a bed, vanity and bench, and chest of drawers. More deluxe, thus more expensive, sets included nightstands, a dresser, a cedar chest, and a armoire/chifferobe. A full dining room set included a table with removable leaves big enough to seat six people, five chairs, china cabinet, and buffet, all of which sold for $103.50.