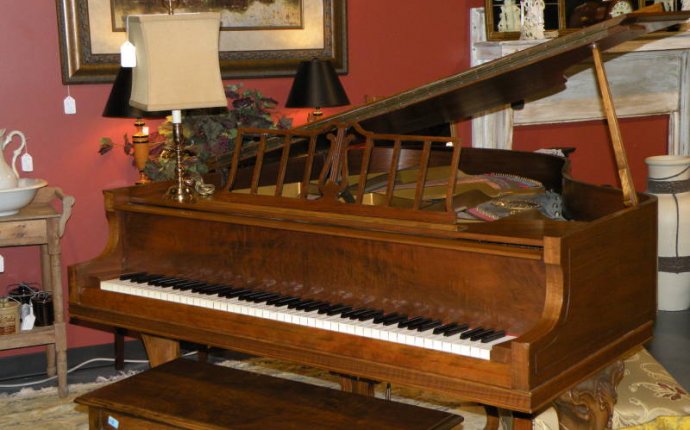 Of course they are all false … or mostly false. Let’s look at each answer and find the truth.

The presence of veneer on a piece of furniture indicates recent production.

It is true that a recently made piece may be veneered but the presence of veneer in and of itself does not mean the piece is new. There is evidence that the ancient Egyptians were familiar with veneering techniques based on furniture retrieved from their tombs. The Romans also used the process, which has fallen in and out of favor over the centuries. It was the absolute rage in the 18th and early 19th centuries as evidenced by the magnificent Regency furniture of France in the 1720s, the Georgian mahogany output of England and the colonies in the late 1700s and the American Federal outburst in the early 1800s. But the technique fell out of general use after that until the early 20th century. It was revived then as a conservation method to use less of the world’s hardwood resources.

The process of actually generating a piece of veneer is a technology-driven process, extremely dependent on the quality of the saws used to slice a log. Early hand operated reciprocal saws wasted about as much wood as they cut and the veneer slices were necessarily thicker than what we usually think of. Water powered rotary saws came along about 1825 and enabled the slicing of an entire log into a long thin continuous sheet of usable, albeit usually bland, veneer. Advances in technology have changed the thickness of veneer from the 1/8 inch of 1725 to the standard 1/64 inch or even 1/110 used in some modern productions.

So it is not the presence of veneer that indicates a particular period of production but rather the thickness of the veneer and its corresponding underlayment.

It is true that a piece of inferior quality furniture may be veneered but again it is not the presence of the veneer itself that determines that inferiority. More important to quality is the overall design and construction of piece, e.g. blocked corners in the case, good dovetail joints in the drawers, etc. But perhaps more important than any of these items is the underlayment of the veneer. In the 18th century thick veneers were applied to solid wood underlayments and secondary woods using primarily hide glue. Expensive mahogany veneer was applied over less costly woods such as pine and poplar. The veneer was so thick that slight imperfections in the underlayment did not “telegraph” through the veneer. As veneers became thinner the sub surface became more important. In the early 20th century the five layer process came into general use solving that problem.

For example, a well made drawer front of 1925 started out as a piece of solid poplar or oak with its grain running the length of the drawer. A sub-layer of inexpensive veneer, gum or poplar of 1/20 inch thickness, was then applied to both sides of the core with its grain at right angles to the grain of the core. Then a face veneer, walnut or mahogany of 1/28 inch was applied to the drawer front with its grain running the same direction as the core. Another inexpensive face was applied to the inside of the drawer front to finish it off. With the sub-layer of veneer to cushion it, the expensive face veneer can be very thin. Of course modern production solves that problem another way. It is very common to see veneer laid over a perfectly smooth manmade material, such as particle board, chip board or even highly compressed paper known in the trade as “medium density fiber core, ” a fancy name for cardboard. What’s UNDER the veneer is more important than the veneer itself.

A piece of furniture with veneer on it cannot be stripped, sanded or refinished.

Most veneer is only 1/28 inch thick but that is plenty thick to allow reasonable sanding if required. Using your hand and a piece of sandpaper you would have to work awfully hard to sand through a standard piece of veneer. A machine sander will do it quickly though so you must be very careful. Other than that, treat veneer as regular wood in your preparation and finishing procedures.

When veneer chips it’s best to remove the old veneer and finish what’s under it.

When veneer chips or peels, it usually is indicative of structural problems such as drawer runners being worn out or it indicates a glue problem. None of these problems can be solved by removing the old veneer and finishing the underlayment, which, as we have seen, is usually much less desirable than the original veneer anyway. First you must determine why the veneer is chipping and peeling and solve that problem first. It may be as simple as reglueing a loose length of veneer that just dried out or gotten damp. Or it may be as complicated as rebuilding drawer runners or stabilizing a loose top or case. In any event that has to done first or you are wasting your time trying to patch and touch up the veneer. If the veneer is not salvageable and must be removed as a last resort, check Sal Marino’s Woodworking Page on the Internet; he has an article about removing veneer. The URL is but be very careful with the procedures outlined on that page — they can generate another whole different set of problems.

The point of all of this is to rehabilitate the good name of veneer, which sometimes gets wrongly maligned by the uninformed and perpetrates some the old “furniture myths” that still circulate.

RT @Whittington_Esq: My pal Paula and I are 'jamming' (and there isn't a scone in sight) with an old music hall favourite. So, without furt…

RT @maureenszturm: "Meredith is so old she went into an antique store and they kept her"

@Tor Oliver 🌻: So for my birthday I got a trip to the Welsh countryside, an antique cat broach and a cosy knitted throw.... how old am I?! #26goingon66

RT @rocktill1: I talked to a antique dealer...He guaranteed that old tradition and values hold the highest investment in ones life for stab…