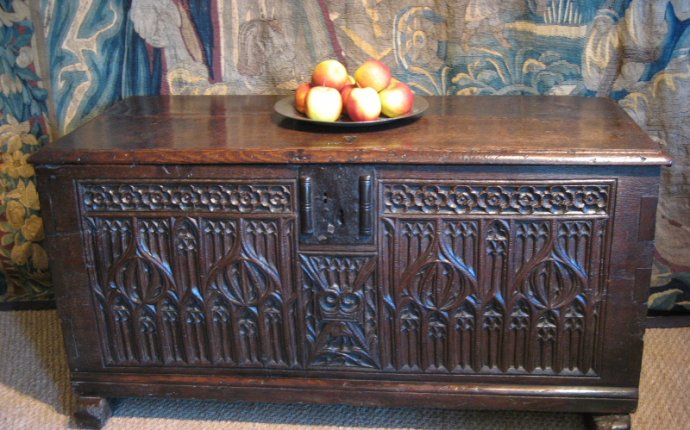 Characteristic of this style is the enrichment of every surface with flamboyant carved, turned, inlaid, and painted decoration in the spirit of the English Renaissance.
The English Tudor period was one of beautiful woodwork, though it was still heavy and sparse by modern standards. Sideboards became fashionable as a way to display plate. The feather bed made an appearance, replacing the straw mattress. Elaborate four poster beds were the mode. Tudor English furniture was made of oak or wood which was obtained locally, highly ornate, carved and heavy.

English Jacobean is used to describe England during the time when James I was king, which was from 1603 to 1625, to King James II (1688). Jacobean comes from the name Jacobus, which is Latin for James. Oak and pine were the most popular woods of choice. The English furniture retained many Elizabethan characteristics but the ornament gradually became simpler and undecorated. Jacobean English furniture was very sturdy, massive in size, notoriously uncomfortable, and made to last. Armchairs and chairs without arms, were richly upholstered with copper nails.

Carolean (from the Latin Carolus, Charles) style or Restoration style
1630 - 1685

refers to the decorative arts popular in England from the restoration of the monarchy in 1660 to the late 1680s after Charles II (reigned 1660 – 1685) New types of English furniture introduced in this period include cabinets on stands, armchairs, wing chairs, chests of drawers and day beds. These are evident in English furniture in the use of floral marquetry, instead of oak, twisted turned supports and legs, exotic veneers, cane seats and backs on chairs, velvet upholstery and ornate carved and gilded scrolling bases for cabinets.

William and Mary has Dutch and Chinese influences. Huguenot refugees from France worked in the cabinetmakers’. It is characterized by trumpet turned legs terminating in a ball or Spanish foot, padded or caned chair seats, and Oriental lacquer-work. The chair backs were shaped slightly to fit, double-arched on cabinets and settees. and the back legs were splayed out at the bottom to prevent the chair from tipping backward. Some of the English furniture was made of oak, but the Colonial workmen were finding walnut, maple, pine, apple-wood, sycamore, and other native woods much easier to use. Marquetry became an important feature of decoration often the form of elaborate floral patterns, cockle shell and acanthus leaf, or the very popular seaweed. The banisterback chair, with and without arms, replaced the caneback chair. Some of the English furniture was painted and gilded. And there were many more settees, upholstered or with loose cushions.