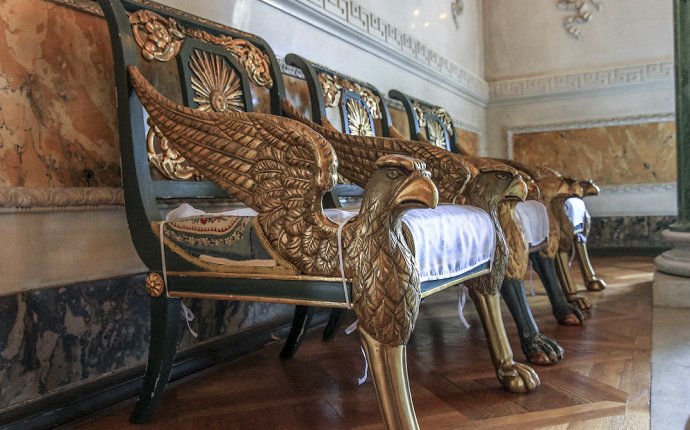 This history of furniture manufacture in Russia is closely linked to the construction of new palaces built in the second half of the eighteenth century in Russia. The influence of European furniture in Russia certainly did not suddenly disappear, but it became a secondary rather than a major source of inspiration. Four groups of furniture emerged:

Marquetry Furniture: Often made with Karelian* birch prized for its unusual and highly ornamental appearance.

Carved and Gilded Furniture: Generally of limewood, gilded with gold leaf to a matt or brilliant finish. Red-gold, green-gold and sometimes silver was added for a decorative effect. The Russians excelled in the tremendous variety of ornamental motifs, such as canework baskets, garlands of flowers and foliage, rosettes, shells, urns, gadroons and pearls, sabots and rams heads, griffins, eagles, harps and sphinxes, which permitted the most elaborate and eclectic combinations.

Carved, Painted and Gilded Furniture: The audacious designs were often a combination of Greek, Roman and Egyptian, French, Italian and German elements. The ornamental details took on such high relief that it seemed to be virtually freestanding, rather than a decorative element. Festooning with garlands of roses and clematis lent a lively quality.The colours most frequently used, apart from the classic shades of gilt and bronze, were orange-red, tortoiseshell brown, ultramarine blue and pale turquoise.

*Karelian is a lumpy burled wood that does not cut into small shapes, making it difficult to work with. It is just one of many birches used by the Russians. Smokey and flame birches are others. It works especially well on Neoclassical and Biedermeier pieces of furniture with broad, simple shapes.

The burl of Karelian birch is caused by beetles burrowing under the bark. The trees grow very slowly. The veneer was hard to make and you needed very sharp blades and tools to cut it. there were many 'holes' and gaps in the veneer and sometimes a 'mosaic' technique was used to piece it together. Early and especially fine pieces have lots of 'burl' - quality veneer is hard to find today.

@C.W.: I am restoring antique furniture as we speak so I might not be as accurate in my