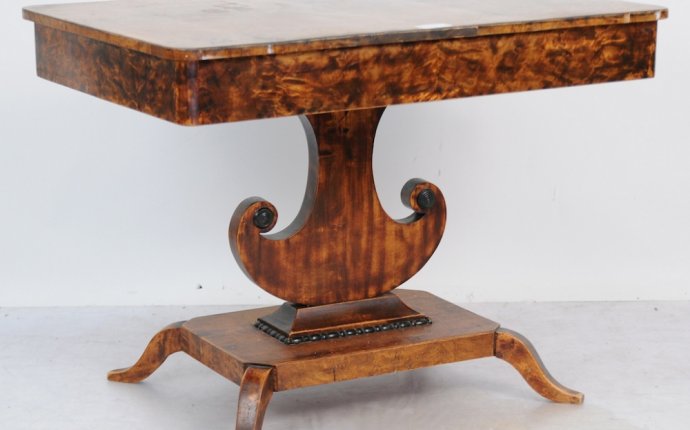 Biedermeier furniture, a style that reigned in Germany and Austria from about 1815 to about 1850, has attracted a loyal following in this country in recent seasons. And now, with an exhibition of some excellent examples of this Neo-Classic mode on view through Saturday at Jean Paul Beaujard, 209 East 76th Street, there may be increased interest in the period.

Mr. Beaujard has assembled 20 examples for this show, two of which are typically Viennese - a curvilinear desk, its round writing surface framed by columns, and a sofa framed by drawers. There is an aristocratic refinement and delicacy to these Viennese versions of the style that is rarely seen in the weightier German interpretations. And there is an architectural integrity to many of the Austrian designs that makes them closer in spirit to French Directoire and Empire than their continental cousins. Most show a restraint of line, an absence of fussy detailing and such practical amenities as a cutout in the top rail of a chair which is perfect for slipping the hand in to move the chair.

''It is a period not very much known in New York, '' Mr. Beaujard said. ''I think these pieces are so easy to live with in small apartments - they are simple, charming, have great ambiance and the light woods makes them ever so appealing.''

Another extraordinary selection is a rectangular table, a spare pale fruitwood design with gently tapered legs and ebonized accents that is a precursor of Joseph Hoffmann's designs produced by the Wiener Werkstatte in the first decade of the 20th century. ''It is the beginning of modern, '' said Mr. Beaujard with a wave at the table which carries a price tag of $3, 500. Less graceful but typical of the period is the drum-shaped sewing table with a lift-up top dating from about 1840 that is $2, 500. A pair of columnar-shaped cabinets for storing dinner plates is $5, 800 and a pair of vitrines is $12, 000. Specialty furniture abounded in this style. A memorable example is the temple-shaped ''medailler, '' a cabinet for coins which opens to reveal shallow drawers at the back. This table-top storage unit - Mr. Beaujard is not certain whether it is German or Austrian - is worth its weight in gold and is priced at a hefty $7, 000.