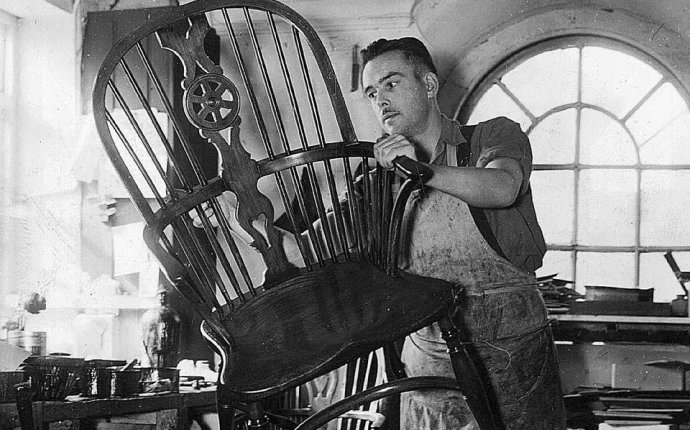 “Antiques Roadshow generally agrees with this notion: Well-conceived and well-executed refinishing and restoration usually enhances the value of just about any piece of old furniture”.

A while ago, we at Antiques Roadshow received a letter from Professional Refinishing editor Bob Flexner, pointing out that our apparent obsession (my word, not his) with “original finish” has had the effect of misleading the public about what repairing and refinishing actually do to the value of furniture – most furniture, that is.

We’re now in our sixth season of Antiques Roadshow on PBS, and many millions tune in every week No other PBS program attracts such numbers week after week, year after year, and if our audience enjoys the entertainment value of the show, they seem to appreciate the information they glean at least as much. This means, of course, that there’s a real premium on the accuracy, dependability and usefulness of the information we provide.

Professional Refinishing contributor Larry Sullivan wrote in a May 2000 Commentary that, while it was fair enough to point out that for very old, very valuable, museum-quality furniture, “a refinished piece has less value than a piece in pristine original condition … But the Roadshow reaches millions of people who almost never see this type of furniture other than in museums.”

The Roadshow further misleads people Larry contended, because when the appraisers talk about value lost because of refinishing, they don’t make the point that they’re only talking about certain rare pieces. And they usually don’t make the point that anything repaired and or refinished was probably in pretty poor shape to begin with. The unfortunate result is that more and more people are afraid to have their dilapidated furniture touched. “They’re even afraid to have minor damage repaired for fear of making a serious financial mistake.”

After noting that most people shouldn’t have to worry about market value and “should be allowed to feel comfortable in having their furniture refinished and restored in a manner that pleases them, ” Larry closes by urging experts on the Roadshow to “play a key role in properly educating the public. While emphasizing the value and beauty of an original finish in good condition, they should also advise the public that most furniture does not lose value when refinished, and that, in fact, this furniture should get a new finish when the old one loses its visual and protective qualities.”

These are very good points. I’d hate to think that we’ve created a subset of American furniture owners living in dread of a fatal financial misstep (though Antiques Roadshow is, after all, all about value, including market value).

We do have many people on the show – probably the majority – who have no intention of selling their pieces, and they are routinely encouraged to enjoy and use their antiques. On occasion, we also go into some detail on issues of restoration and conservation. Still, if I’m reading this thing correctly it sounds as if the Roadshow furniture experts are always saying, by and large, “leaving things alone is good, refinishing is bad.”

Understandably, our Americana experts on the Roadshow live for wonderful old pieces of furniture that have somehow survived in terrific condition – pieces not used too hard, left out in strong light for long periods of time or forced to survive a flooded cellar. Most old furniture, of course, doesn’t come close to meeting those standards. On the contrary, most furniture has been well used (even abused), scratched, broken, and often repaired many times. How could such furniture not be improved by a good job of refinishing or restoring?

I talked with some of our furniture specialists, and it’s fair to say that I found more agreement than I expected on this issue. Stephen Fletcher of Skinner, Inc., told me that more and more people are now “smart enough” to ask the question about a given piece: “Is this something I shouldn’t touch, or does it matter?” Others in our cadre of furniture regulars said more or less the same thing.

As an example, a great old secretary (bookcase on chest) made in about 1820 by Christian Shively came into our Indianapolis event this year. It had come to the current owner covered with 80- to 100-year-old paint, and she’d had the piece completely refinished. John Hays, the Americana specialist from Christie’s, said, “You had no choice, ” and went on to compliment the refinishing work and state the obvious: that the restoration had saved the piece and created substantial value where there had been virtually none.

To be sure, this is just one instance held up against many others on the show that glorify an original finish, and it’s true that we don’t include very much “ordinary” furniture. We’re planning a segment in a future Roadshow, however, involving three pieces of furniture: one that shouldn’t be touched, one where it wouldn’t make any difference what was done to it, and one someplace in the middle.

The question of what to do when a piece isn’t quite perfect arises just about everywhere we go. At the Antiques Roadshow stop in New York City, Leigh Keno came across a classic, circa- 1765 Philadelphia candle stand he said was in beautiful “original” condition – except for a “new” finish that someone had applied to the top about a century ago and that was badly alligatored. Even with this defect, let’s call it, Leigh thought the table would bring something like $150, 000 in today’s market.

Leigh asked the table’s owner whether or not she was disposed to fix the top. She replied that she’d rather leave it alone, and Leigh agreed: “That’s probably what I would do.” Well, having heard from Professional Refinishing last year, we wanted to press Leigh on that point, so we asked him why this table wasn’t a perfect candidate for a good, professional attack aimed at restoring something close to the coveted original finish? Wouldn’t that both improve the aesthetic qualities of the piece and enhance its value?

The answer, Leigh said, was that many high-end collectors – his customers – wouldn’t mind the addition of the second finish, and that the old look of the craquelure might even be appealing to some. Trying to remove the added finish to reveal the original underneath is easier suggested than done: The original finish might not even be there, and refinishing would likely make the piece look too new.

So where does that leave us? Let the record show that Antiques Roadshow generally agrees with this notion: Well-conceived and well-executed refinishing and restoration usually enhances the value of just about any piece of old furniture. Exceptions are those rare (often museum-quality) pieces that have somehow survived in great `original’ condition. If we say or imply the contrary, we should be called on it.

I thank Professional Refinishing for the chance to address the issue here, and I hope many professionals in the refinishing business will let us know from time to time what they think.

Peter B. Cook, executive producer of Antiques Roadshow, has been a writer and producer at WGBH Boston for 32 years. His award-winning credits include The Advocates (1970-74), Arabs and Israelis (1975), and Concealed Enemies, winner of the national Emmy for Best Limited Series in 1984. He also made a few trestle tables back when 5/4 by 18 clear pine was $1.25 afoot.